Have you ever wondered why the toilet is starring in a lot of horror movies? In fact, it’s almost cliché to find a character in the toilet being completely oblivious to the horror that is going to come next. It’s become so predictable, you know that something almost always happens in the bathroom.

One theory is that doing your thing in the toilet feels personal like an intimate unguarded moment that leaves you defenceless should something horrible strike. In honour of Halloween, we’ve gathered some of the terrifyingly memorable scenes from horror movies.

WARNING: Video links may contain EXTREMELY GRAPHIC SCENES. For the faint of heart, you have been warned!

Just by looking at the movie poster, you can see that the toilet already takes centre stage. Street Trash is comedy horror movie classified as one of those “melt” movies–films that feature graphic depictions of melting human flesh which either bubble or liquefy in a gruesome manner leaving the audience in horrified fascination. The melting occurs in a semi demolished toilet area, and if you’re not squeamish, you can check the graphic scene below:

Ghoulies II is another movie featuring the toilet in its movie poster. 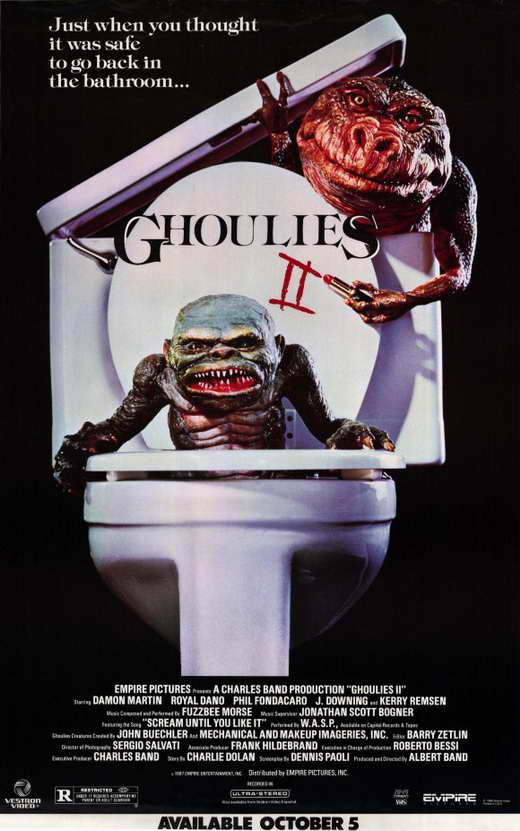 It’s not  the best horror movie around but the thought of monsters climbing out of the toilet is a scary thought!

What could be worse than being caught with your pants down in the toilet? Having the portable toilet fall apart and finding yourself face to face with a ravenous T-Rex!

This is exactly what happens in Jurassic Park.

Slasher movies are part of the horror genre and this is why Scream 2 made it to this list despite being a slasher film. There is a kind of horror in being stuck in the wrong place at the wrong time, which is precisely what happens to Phil Stevens in the restroom early on in the movie.

This film falls more under the psychological horror thriller than the supernatural kind. In these types of movies, the toilet is a favorite place for mental meltdowns like this scene.